For centuries proud canine owners around the world have competed in dog shows to determine which dog was the best of its breed. This sport was originally started to determine the best breeding stock.  For the most part, the participants were wealthy gentlemen and hunters. That has changed and by the late 1900's / early 2000's the sport became the much loved pastime of the everyday dog lover.  Each country has an organization that tracks show wins and grants championship credentials to the dogs who earn the established number of wins or points for that country.  For each breed a standard has been developed to which all judging must adhere.  Standards may be slightly different in wording depending on the country or registry.  You can view the Canadian Schipperke Standard by clicking here.

Now participants in many countries around the globe show off their much loved canines to knowledgeable, licensed judges.  The judges examine the dogs entered in various categories called classes against the standard.  By the process of elimination the finest is awarded the coveted Best of Breed.  All the Best of Breed dogs are then eligible to compete against all the other Best of Breed winners at the Group level.  Schipperkes compete in the Non-Sporting Group in Canada.

The following is a list of the other dogs in the Non-Sporting Group:

The judge assigned to Group Six will select what in his / her opinion are the four dogs that conform the closest to their breed standards and will award them either First, Second, Third or Fourth placements in Group.  Many shows also select the best puppy (6 months to 12 months of age) and best baby puppy (3 months to and including 5 months of age).  The puppy classes are a crowd pleaser and often fun to watch and to participate in.

The first place winner in each of the seven groups (i.e. 1 = Sporting Group, 2 = Hounds Group, 3 = Working Group, 4 = Terrier Group, 5 = Toy Group, 6 = Non-Sporting Group and 7 = Herding Group). From this group the judge assigned the honour to judge Best in Show will select the dog in his / her opinion that is to be awarded Best in Show.

Several shows have become very well attended boasting thousands of entries and huge audiences. Audiences have grown even larger since popular shows have been televised and viewed globally. The largest is likely the Crufts All Breed Dog Show in the UK which often boasts over 25 thousand entries that takes many judges a week to judge to the final Best in Show. The Westminster Show in New York City is likely the second largest show in the world. Those dog enthusiasts living in North America should try to attend Westminster at least once as it is an experience that will never be forgotten.

Schipperkes are doing well in dog shows and many people have purchased a Schipperke to not only be their family companion, but to also enjoy participating in the show ring with them as a family pastime.  You can learn more about conformation dog shows by visiting the Canadian Kennel Club, or by finding out which dog clubs exist in your own area. 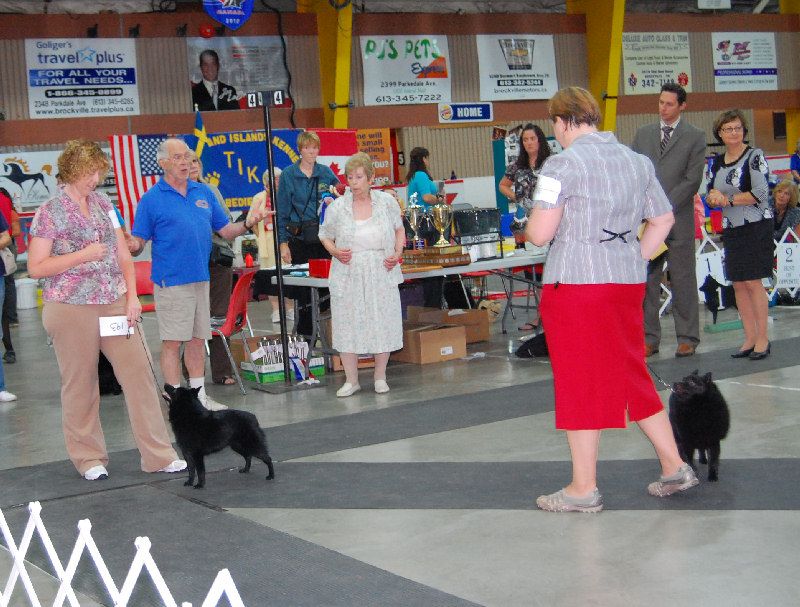